KUALA LUMPUR – Four police officers and four women were arrested while having a wild party at a police station in Kajang during a raid by Bukit Aman yesterday.

He said, the police officers were partying in a special room with four local women during the raid. They are aged between 21 and 37 years-old. They have been arrested for further action.

He said, the arrest was made to investigate on the violation of the standard operating procedures (SOP) of the Movement Control Order (MCO) to curb the spread of Covid-19 for gathering and entertainment.

“We will investigate their misconducts under Regulations of Public Officers (Conduct and Discipline)(Amendment) 2015 without compromise,” he said.

Further investigation is ongoing, including actions under Section 269 of the Penal Code for negligence that may cause the spread of infection diseases dangerous to life.

MalaysiaGazette was also told that five bottles of ketum water and an explicit photo of a police officer arrested along with a woman were also seized. –MalaysiaGazette 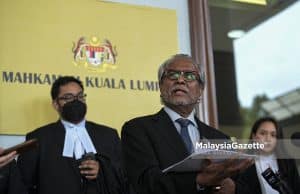