KUALA LUMPUR – The Sessions Court ordered comedian and actor, Ali Puteh to pay RM60,000 in compensation to his sister-in-law, Siti Nor Hidayah Mohd Ali over his derogatory statement on his Instagram account two years ago.

Judge Zulqarnain Hassan issued the order after Siti Nor Hidayah, 30, as the plaintiff won a libel case against her. Ali Puteh or his real name, Syed Ali Mubarak Syed Mohd Ridzuan, 34, was named as the defendant.

While reading out his judgement, Judge Zulqarnain said that Ali Puteh’s post had degraded the dignity and was extremely derogatory against the widow of the late comedian, Abam Bocey.

“Those were very harsh and excessive words, as if, the widow (plaintiff) was another species and her career was to rob other people’s properties without any feelings.

“If words like ‘you are stupid’ or ‘you are evil’ are derogatory, what’s more with the word ‘animal’?

“Even if they were used against a patient who was laying on the hospital bed, she would try to get up and defend her rights. This was pointed at a woman who had just lost her husband a few days ago, she lost the place she could depend on, she was still sad with the passing of her life partner, concerned about how she would raise her one-year-old child,” said the judge.

Siti Nor Hidayah filed the libel suit against Ali Puteh in May 2020 following his statement in his Instagram account. He labelled her as an irresponsible individual with a ‘heart of an animal’.

The woman demanded for compensation in general, exemplary and punitive damages without stating the amount.

She also applied for an injunction order to stop her brother-in-law from publishing any slanderous remarks against her and other codes and reliefs deemed fit by the court.

Meanwhile, in the same proceeding the court also dismissed the defamation suit by Ali Puteh and his three family members against Siti Nor Hidayah and cosmetic entrepreneur, Datuk Seri Aliff Syukri Kamarzaman with the cost of RM13,000.

In the lawsuit, Ali Puteh, along with his father, Syed Mohd. Ridzuan Syed Hassan, 65; his mother, the late Sabariah Arshad, 63; and elder sister, Sharifah Norwahidah Syed Mohd. Ridzuan, 42, filed the suit against Aliff Syukri and Siti Nor Hidayah in July 2020 over the live interview on the entrepreneur’s Youtube channel.

The interview had allegedly slandered and tarnished the dignity of Ali Puteh and his family members as the plaintiffs.

The crisis between the duo emerged after the death of Abam Bocey or his real name, Syed Umar Mokhtar Syed Mohd. Redzuan on 10 February 2020 due to fever. -MalaysiaGazette 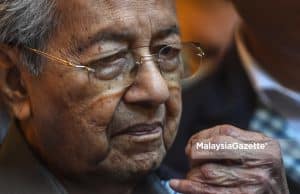