The following article is submitted to the editorial of MalaysiaGazette by the former aide to Tun Samy Vallu, Dato’ E. Sivabalan.

The “Man of Steel”, the father of Malaysian highways, is no more but his legacy lives on. Tun Samy Vellu who passed away today, had always said this to say to me, “I am not just your boss, but a friend too.” Just like the Indian movie icon Rajini, Tun Samy Vellu also started his career as a bus conductor and went on to become a household name.

Before he passed away in the wee hours of the morning in his sleep, a few hours earlier, he wanted his driver to take him on a short drive. I could not believe that it would be his last wish.

I have known this legend personally and having served him as his aide for the past 34 years in various capacities, serving as his special officer at the MIC headquarters in 1988 immediately after graduating from UKM, then becoming his Press Secretary from 2002 to 2008 when he was the Minister for Works and his Principal Private Secretary from 2010 to 2018 during which he was the Special Envoy Ministerial rank to India and South Asia.

Some of the things that we did together when we were on official duties overseas included helping him to press (iron) his shirts. Though he could have handed them over to be done by the hotel where we stayed, he had always wanted to do his own stuffs so that he would get it right. Like in the case of pressing his shirts, he would want to make sure that they were pressed correctly, especially on the sleeves. “You have to make sure that there is a straight line on the sleeves when you press,” was what he would tell me when I held his shirts while he pressed them and it would take hours at times. His penchant for designer suites (Brioni) made him stand out among his former Cabinet colleagues. He had to start his day with a cup of cappuccino. It is true that he had a temper but he would only take it on the people he liked and cared. Never a day went by without him emptying his pocket when someone or groups of people, mostly the poor, paid him a visit for some assistance. He surely had a soft heart for the poor.

When travelling with him in his Benz car (he always went for a Benz car), he would joke about the people’s comments on his command of the Malay language. He took it in full stride and would always tell me that I should not be upset. To him, the people are his boss, his masters.

He shared an incident with his former boss, Tun Dr Mahathir Mohamad when he was the Prime Minister. During a Cabinet meeting, Tun Samy Vellu had requested for additional allocations from the Prime Minister for the development of the Indian community.

I bid him farewell. 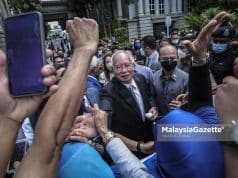